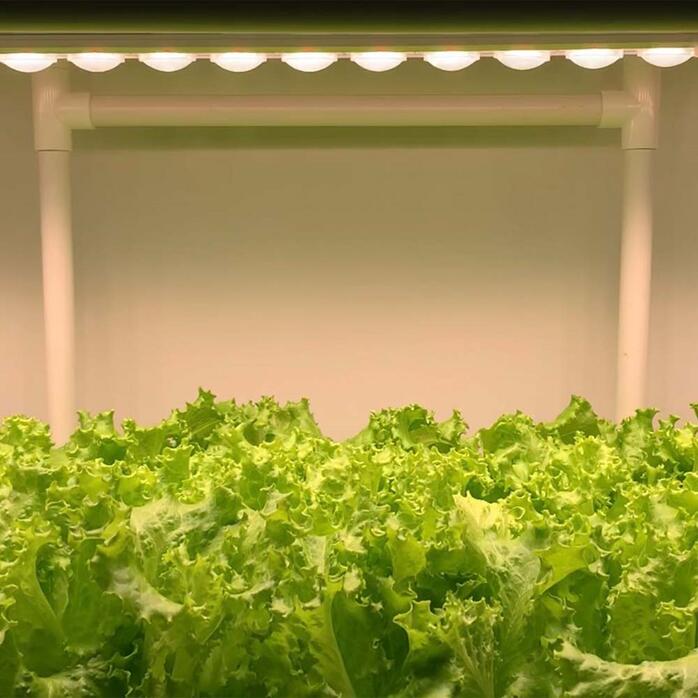 G45 series of plant lights are high-efficiency plant lights designed for indoor vegetable and ornamental plants. Compared with ordinary T5 and T8 lamps, it can save energy by 50%.

The most important parameter of plant illumination is PPFD, which is photosynthetic light quantum flux density. Its unit is umol/m2/s. PPFD is equivalent to the illuminance perceived by humans. For general vegetables, or ornamental plants such as succulents and cordyceps, the illuminance requires PPFD >100umol/m2/s. To achieve a good growth state, PPFD needs Higher, the average value is preferably higher than 250umol/m2/s, and the light required for tissue culture is about 60umol/m2/s.

Let’s take a look at the energy-saving rate of G45 through two practical examples.

The use of ordinary 18W T8 lamps requires the use of 8, and the actual power is 137W; while the G45 series of high-efficiency plant lights requires only 2 and the power is 40W. The energy saving rate is 70%.

For tissue culture or ornamental plants with low light, it requires PPFD 60umol / m2 / s to cover an area of 0.45×1.2m and an irradiation height of 0.6m 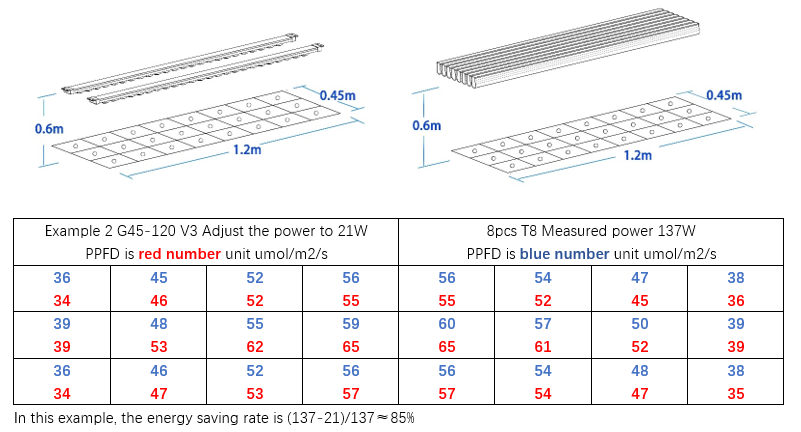 Why do G45 plant grow lights save energy? 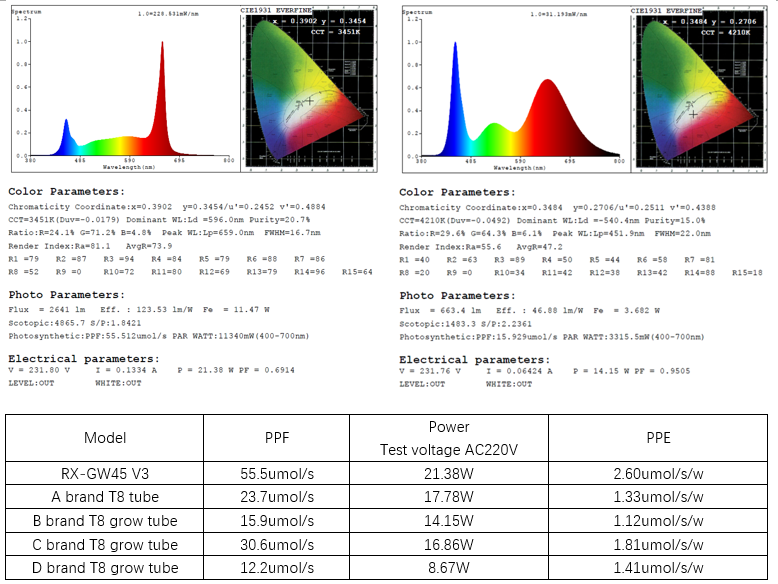 G45 series, patented unique lens structure, uniform spectral radiation, lens + reflector, directional illumination, higher light utilization efficiency, the light of the plant lamp generally illuminates the plant canopy, T5 and T8 lamps are not aimed at the environment of plant cultivation For luminosity optimization, no secondary optics such as lenses or reflectors are used. The light is scattered, resulting in a lot of light waste. G45 undergoes secondary optical processing of the reflector and lens, condensing the original 120-degree or even 180-degree light into a beam of about 60 degrees, so that the light emitted by the LED can be used to a greater extent, thereby improving the PPFD. Achieved the purpose of energy saving. 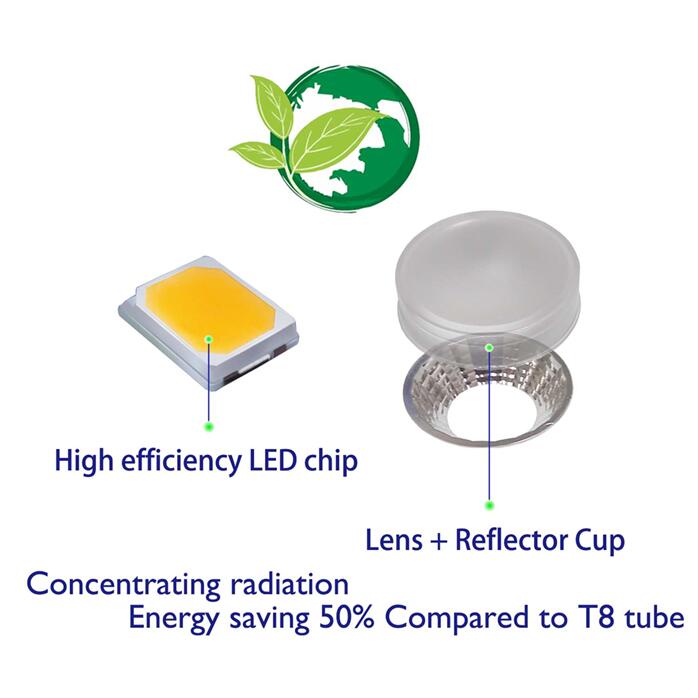 Plant planting and ordinary home photos require much higher light. We humans perceive illuminance Lx, and plants perceive PPFD. When PPFD exceeds the light compensation point of plants, plants can photosynthesize and grow. According to the calculation of white light, the ratio of Lx and µmol/m²/s, generally 60-70Lx, is equal to 1 µmol/m²/s (this is only a rough calculation method, and other colors other than white light will be different). In other words, the light of 300Lx is equivalent to 5µmol/m²/s, and the light compensation point of most plants is above this. Generally, the light of normal planting needs to exceed the compensation point by 4-5 times for the plants to be healthier. Therefore, less than 50µmol/m²/s is meaningless for indoor planting, which requires 3000Lx of light.

Generally, indoor crops or ornamental plants are grown in the home, and the planting area is not too large, with a width of 0.4-0.6m and a length of 0.9-1.2m. The general shelf width is also between 0.4-0.6m. This application scenario is designed The important reason for G45 series plant lights. The smaller the planting area, the more obvious the energy saving rate.

Even in plant factories, compared to T5 and T8 plant lamps, the energy-saving effect of G45 is also very obvious, because similarly, a large part of the light of T5 and T8 lamps is not irradiated on the plant canopy, causing waste. 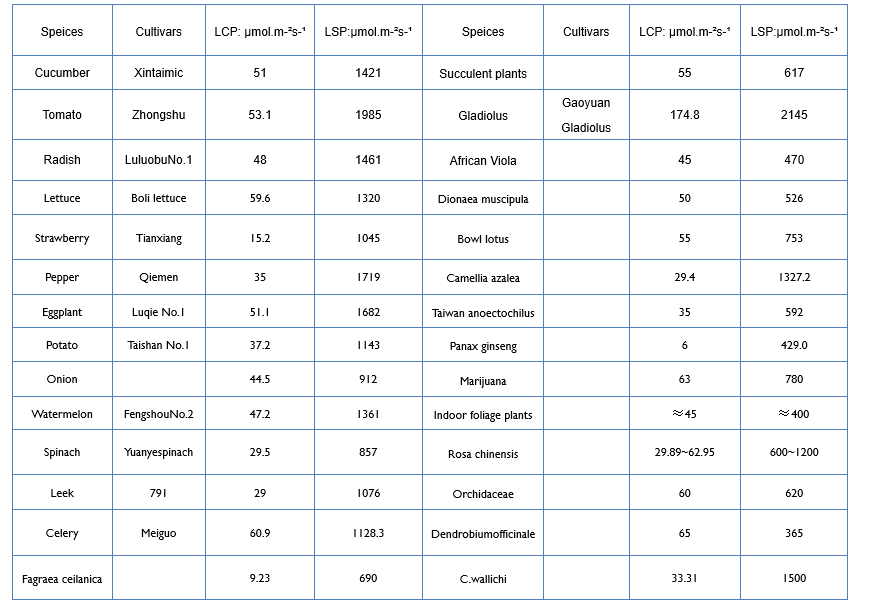 The light source of the above data is sunlight, which is for reference only. Different spectra, light compensation point and light saturation point are different. Different plant species will have differences